My lovely wife was recently on a painting trip to Portugal, Spain and Morocco.  You can check out some of her watercolors here.  While in Marrakesh, she really enjoyed the Moroccan foods and returned home not only with some great new spices for me to play with, but also a request that I try making some Moroccan food for her.

My initial experiments were dismal.  Even if you are able to read a recipe and have a sense for it, sometimes that's not enough.  After trying a few tries at recipes from books I found at the local libraries, and getting feedback from Pat on what worked and what didn't, I started to get some idea of how the Moroccan food should taste.

To supplement my spices, I had gone shopping at a local store that has a wide variety of ethnic ingredients.  There I found green cardamom pods and cinnamon bark.  A soon as I smelled the cardamom pods, I knew they were going into something special.  They have a wonderful flowery note that black cardamom lacks.

Then one day I had some pork tenderloin which I thought would make a good tajine.  For some reason, I had it in my mind that I wanted to do a pork and pear combination.  After some searching, I found three recipes, each of which had something, but was missing something else.  There was a Moroccan pork recipe that didn't use a tajine or cook in that fashion, a pork tajine that didn't have pears, and a pork and pear recipe tajine that didn't use any of the spices that appear to be related to Moroccan cooking.  What to do?  The answer was obviously to combine the best of each of the recipes, put a little personal spin on it and see what happened.

The result is my Pork and Pear Tajine with Dried Apricots.  I make no representation as to its authenticity.  In fact, since Morocco is largely Muslim, I expect a pork tajine is somewhat of a travesty. 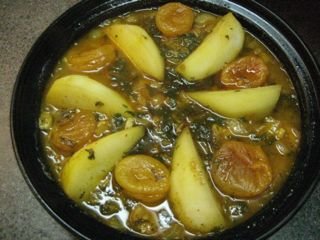 I don't recommend replacing the green cardamom with black, as the result will not be as tasty, and the back cardamom may overpower the dish.

If you don't have a tajine, the dish can be made entirely in an ovenproof pan with a tight fitting lid.

Yummy ! It makes my mouth water! I'm curious to try, Thanks for your recipe!